The so called late-maturing, indeterminate varieties produce several levels, while early, determinate ones produce very few levels only. Also when the plant grows under prohibitive long day and high temperature conditions no tubers appear. In such situations stems form more than four levels. The number of leaves per segment between the nodes also increases with higher temperatures and longer days. Besides apical lateral stems, a main stem brings about basal lateral stems from aboveground or from belowground stem nodes.

Lateral stem
A seed tuber, when planted at the start of sprout formation and with a single sprout at the apical part of the tuber, often produces only one single main stem with its lateral stems. This because the apical dominance of this sprout prohibits the formation of sprouts and stems from the other eyes. A well-sprouted seed tuber, however, produces several main stems from sprouts from several eyes. Occasionally even two stems are generated from two sprouts from a single eye.

Thus, a seed tuber yields a potato plant comprising one or several main stems each acting as a different independent plant. They do however compete, due to their proximity, for light, water and nutrients. Single-stemmed plants from a single-sprouted tuber, as well as singlestemmed plants derived from a seedling from true potato seed (TPS), create more branches than closely spaced main stems emanating from a plant from a mother tuber with multiple sprouts. 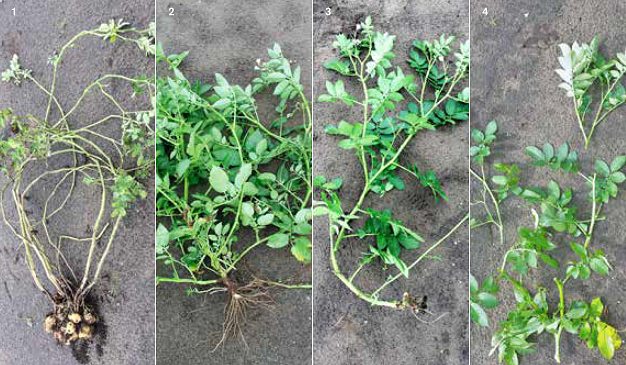 A mother tuber produces a plant with four or five mainstems (1). The more mainstems there are, the less lateral stems are formed because of competition for water, minerals and light. A mother tuber with apical dominance produces a single stemmed plant (2) that produces several lateral stems, four to five here. Lateral stems are formed at the stem segment below ground or just above soil level. Branches of stems (3) higher up at main or lateral stem originate in axils where an inflorescence is formed. Inflorescences are still seen as peduncles with aborted flowers or fruits, best observed where a stem is cut up in segments (4).

Want to read more about other aboveground structures (leaves, flowers) and underground structures of the potato plant?
Chapter 2 of our Potato handbook dives into this subject, from growth and reproduction to the effects of biotic and abiotic conditions.

The Potato handbook, a global University on the Crop of the Future in one book!
Buy your copy today and get a one-year free subscription to PotatoWorld magazine.