An effective grower warms up his potatoes in the right way 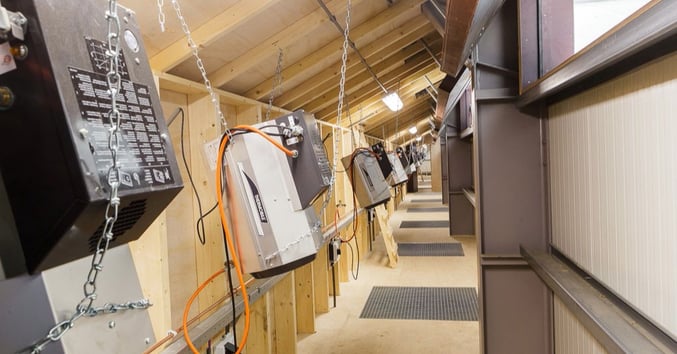 Potatoes in storage, will first need to be warmed up before transport.

The desired and/or optimal temperature for the delivery of potatoes on the day they leave storage for the trader, packager or factory depends on the storage temperature used up to then and the final destination. Table potatoes that are stored at 3 to 4 degrees Celsius, will first need to be warmed up to 8 to 10 degrees Celsius. This is necessary in order to transport, grade and package them without too much damage and blue discolouration. In principle, the same also applies to crisp and French fries potatoes, but these need less temperature increase.

Usually their storage temperature is between 5 and 7 degrees Celsius and warming up to at least 8 degrees is required before they arrive at the factory. The optimal temperature depends on the process the potatoes have to go through from storehouse to end product. This involves the use, for example, of many conveyor belts, grading and pre-grading, and the total duration of the entire process. Warming up is done with the help of outside air or with heaters. The advantage of using heaters is that the risk of condensation is much lower, whereas this will regularly happen when warming up with outside air.

Delivery of only part of a lot is only possible for potatoes stored in boxes. It is advisable to warm up these boxes in a separate space. A smaller drying wall in which, for example, 100 boxes can be placed, works very well for this. When a lot of potatoes is sensitive to age-related sweetening, it is important that the warming process does not take too long. Agerelated sweetening is the natural process by which the starch present in older tubers is converted into sugar. The time at which this occurs, depends on the storage conditions during the storage period and the characteristics of the potato variety. It is sensible not to store such lots for too long or at a too high temperature, as this can cause the frying quality to decrease rapidly, because more reducing sugars will quickly be produced.

Harvesting in the right way and at the right time is an important step that precedes optimal storage.

This also applies to warming, in case a too high CO2 content will occur during the heating process. The gas can be discharged during the burning process in the heaters and, at the same time the potatoes will also produce more CO2 due to the rising temperature. Conversely, the warming up of tubers can also improve the frying quality because, as a result, the respiration increases and the reducing sugars content drops. In order to achieve a substantial reduction in frying quality, it is necessary to store the potatoes at a higher temperature for a longer period of time before delivery, usually several weeks. However, one must be certain that the lot is not sensitive to age-related sweetening before doing so.