An introduction to potato starch production 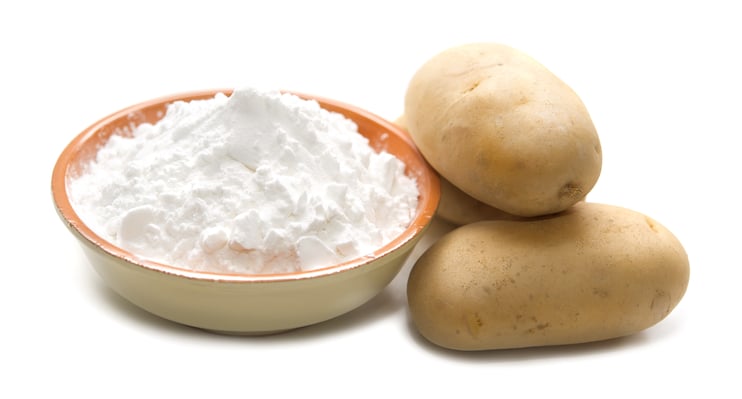 In the USA, some potato starch is also produced by potato chips and crisps factories that bring waste, side streams rather, to value.

Potatoes for processing into starch need to be handled with some care to avoid that foreign fragments mingle with potato tuber cells and starch. No occurrence of black spots and corky spots is allowed above a certain limit because this makes refining later more difficult as such defects encapsulate soil particles. The potatoes arrive by lorry and then are fed to the processing lines of the factory by water jets or conveyor belts. After destoning and cleaning the tubers are rasped to mush containing potato juice, fiber and starch. Sulphur dioxide gas or sodium-bisulfite solution is added to prevent enzymatic discoloration and to keep the light color of the mush.

The starch granules are liberated into the fluid that also contains phenols and tyrosine that with oxygen produce dark colored polyphenols. As this is not desired the starch is separated in hydrocyclones, devices that separate substances with different densities with centrifugal forces). Next starch is washed with sulfuric acid upon which the starch milk with 60 percent water is dried by a rotating vacuum filter and hot air to a moisture content of some 20 percent. As there is air between the granules the bulk density of the starch is only 0.7 g per ml which happens to be similar to that of potato tubers: 700 kg/m3. The air-free product consists of starch granules with a specific gravity of 1.55 g per ml sized between 50 and 100 nanometer and also contains traces of sand, calcium, protein, potassium and iron.

The production scheme of potato starch has initial stages not unlike that of food grade processing factories such as sampling and washing. Some processes, however, are relatively crude such as rasping. Contrary to the final product in the chips and crisps industry the final product starch is not much influenced by the underlying processes. Less fine tuning is involved in the starch industry and more of the whole production process is automated.

Want to keep reading about the potato crop and potato starch production?
Our Potato handbook is a global potato university in 1 book!
Buy your copy today and get a one-year free subscription to PotatoWorld magazine.