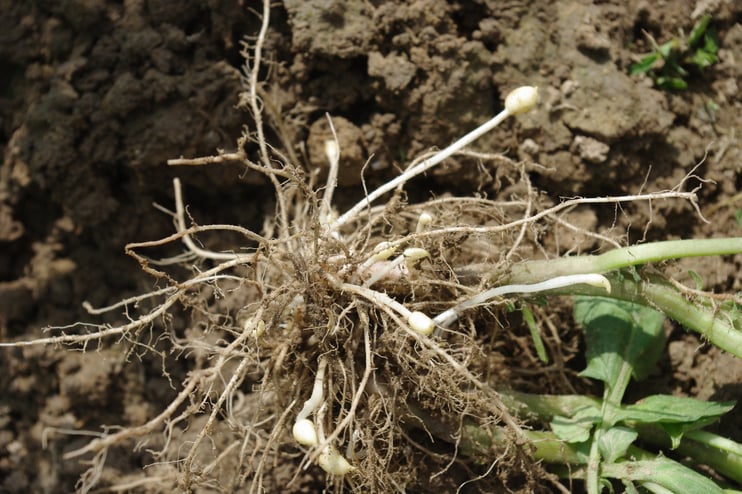 First there is the genetic material, a species and variety aimed at growing a crop adapted to the local conditions, resistant to the prevailing pests and diseases and producing the right quality specifications. Secondly the physical planting material is trusted to the soil: the seed tubers, in-vitro plantlets or seedlings and in case of seed tubers, their age, size (whole or cut) and health. The larger the seed tubers or the greater the mass of the mini-tubers, micro-tubers, rooted plantlets from seed (seedlings) or in vitro plantlets, the earlier and to a greater extent the soil is covered by solar radiation intercepting foliage and the higher the yield. Lower yields are accepted if the planting material is cheaper, or if the harvested product represents a higher value. Mini-tubers and micro-tubers are devoid of pests and diseases so their product is valuable basic seed material that justifies their lower yield.

There are management options to manipulate the age (the dormancy stage) of the seed tubers to hasten or postpone planting. Higher storage temperatures (e.g. 15 °C rather than 4 °C) initially leads to earlier sprouting and give rise to one single sprout per seed tuber. Upon planting this seed produces single stemmed plants. Prolonged high storage temperatures, however lead to more sprouts per seed tuber. When kept in the dark, sprouts elongate and break off when handled for planting, upon which new sprouts grow. This is avoided by pre-sprouting in the light which results in firm sprouts that stay attached to the tuber when handled with care, even by machine planting. When kept for too long the seed turns senile and produces little tubers on the sprouts in the store nor in the field without plants emerging.

Growers can advance emergence and harvest by planting older seed, pre-sprouted in diffused light, of an early variety in soil warmed by transparent plastic sheeting. This is done, for example, in coastal northern Europe with short winters to supply the market with early local potatoes between the imports from the Mediterranean region and the harvest of the local main crop. 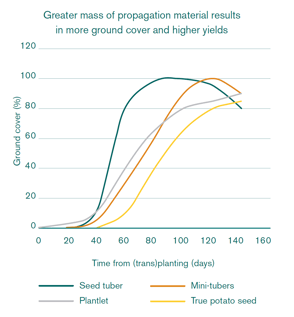 Seed tubers weigh more than mini-tubers that have a greater mass than rooted plantlets derived from botanical seeds (true potato seed, TPS) or from in vitro. Micro-tubers produced in vitro show a ground cover pattern between that of mini tubers and plantlets. Actual ground cover patterns depend on variety, tuber and plantlet size combined with growing conditions. Yields are proportional to the amount of solar radiation intercepted by the crop, so are closely correlated to the areas under the curves.

Want to keep reading about the potato crop and planting decisions?
Our Potato handbook is a global potato university in 1 book!
Buy your copy today and get a one-year free subscription to PotatoWorld magazine.