Potatoes need much potassium (K). Second to nitrogen, K is adsorbed most by the plant.

Symptoms of K-deficiency are frequently found on loamy sand, marine clay and (heavy) river clay soils as well as on sandy and peaty soils. K-deficiency occurs mostly during the second half of the growing season, and then often during prolonged dry periods after a period of abundant rainfall. With plentiful of rain, K partly leaches out of the foliage, so that an increased need of K develops. As K is crucial for the water balance in the plant, an acute K-deficiency and damage may develop during a sequent period of sunny strongly drying weather. In the soil, substantial shortage of K may develop by leaching or by insufficient application. Furthermore, K may insufficiently be available to the crop because of: a) fixation, for example on river clay soils and b) interaction between Ca++- and Mg++ ions. In such cases, K-deficiency may occur in spite of the fact that, according to the soil analysis report, K-values were equal to or above the target value. Thus, the magnesium content of the fertiliser to be used must be taken into account. In fact, and certainly for starch potato crops, the K-value must be corrected. The higher the Ca and Mg contents in the soil the more K should be applied.

Function and mobility
K is essential for the normal growth and development of the plant. Inside the plant, K is highly mobile, as well as between individual cells as between tissues and within the vascular ring. In the case of a K-deficiency, K is withdrawn from older leaves for the benefit of younger ones. Although the K+-ion itself does not take part in metabolism, it is the most common ion in cytoplasm and plays an extremely important role in the osmotic potential of cells and tissues. The K-ion also plays a special role in the water balance of the plants. Because of its high concentration in cell sap and chloroplasts, K has an important influence on the pH of cytoplasm, and it stabilises the pH between 7 and 8, the optimum range for most enzyme reactions. Potassium plays an important role in meristems, in cell elongation, activating enzymes, photosynthesis, synthesis of proteins, and in opening and closing of the stomata; in short, in a great number of important life processes of the plant. 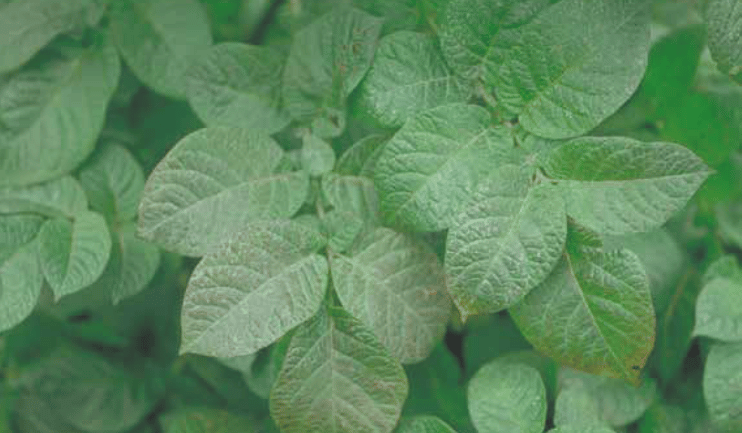 The first symptoms of K-deficiency: dark coloured, deep-veined, shiny leaves, with an onset of bronzing.
(Photo: Soil and Crop Improvement Assen, the Netherlands)

Want to read more about Potassium deficiency and potato diseases in general?
Then our Potato diseases book is what you are looking for!
Buy your copy today in our webshop: