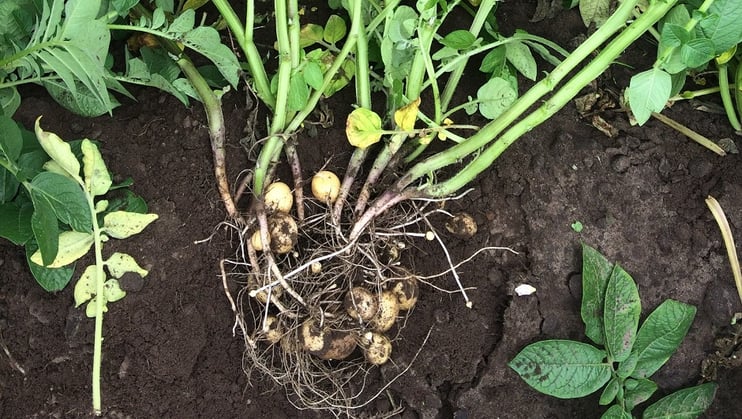 Not all eyes on a seed tuber produce a sprout; on average, much less than half do and the number of sprouts at the multiple sprouting stage varies between two and ten, four on average.

Four sprouting eyes give rise to the formation of four stems per plant on average. The number is lower when very small tubers of less than 20 g are used and higher when large tubers over 100 g are planted. Plants subsequently produce roughly between 15 and 30 stolons, on average 24, or six per stem. Not all stolons produce tubers at their tips, but some branched stolons produce more than one tuber to result in an average number of one tuber per stolon, so 24 tubers per plant of four stems.

With each organ produced successively, the spread of the numbers increases. The number of tubers produced per sprout spreads from about 2 to about 12. The proportion of organs yielding the next one (sprouts form stems form stolons form tubers) depends very much on the growing conditions, especially the humidity of the soil.

The number of tubers per plant and thus its tuber size distribution is hard to predict. This is the opposite of forecasting total tuber yield based on weather parameters which is rather accurate. Considering initiation and resorption, variations in the number of eyes per tuber, sprouts per eye, stems per sprout, stolons per stem and tubers per stolon are ample and cumulative. Hence, to predict the size distribution at final harvest, the number of tubers has to be assessed well in advance by pulling up samples of plants and counting the number. 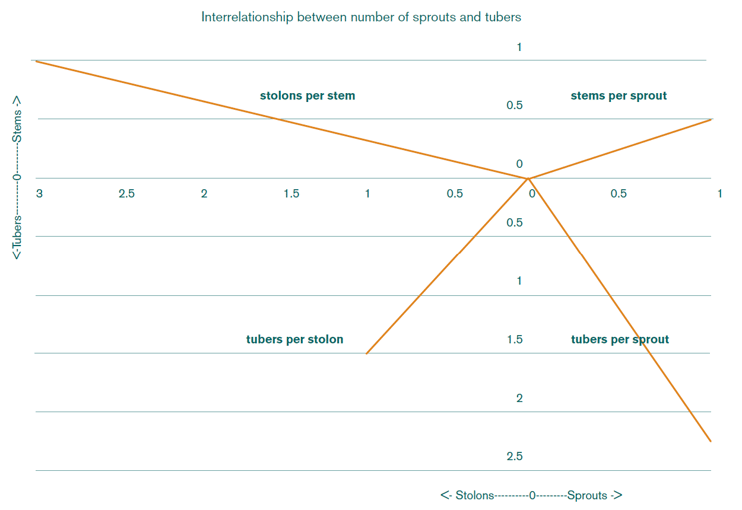 Not all eyes lead to sprouts, not all sprouts lead to stems, a stem yields more than one stolon and a stolon more than one tuber, resulting in several tubers produced per planted sprout. The actual data depend on variety, seed physiology, health status and environmental weather and soil conditions.

Want to read more about tuber development and other underground and aboveground structures of the potato plant?
Chapter 2 of our Potato handbook dives into this subject, from growth and reproduction to the effects of biotic and abiotic conditions.

The Potato handbook, a global University on the Crop of the Future in one book!
Buy your copy today and get a one-year free subscription to PotatoWorld magazine.