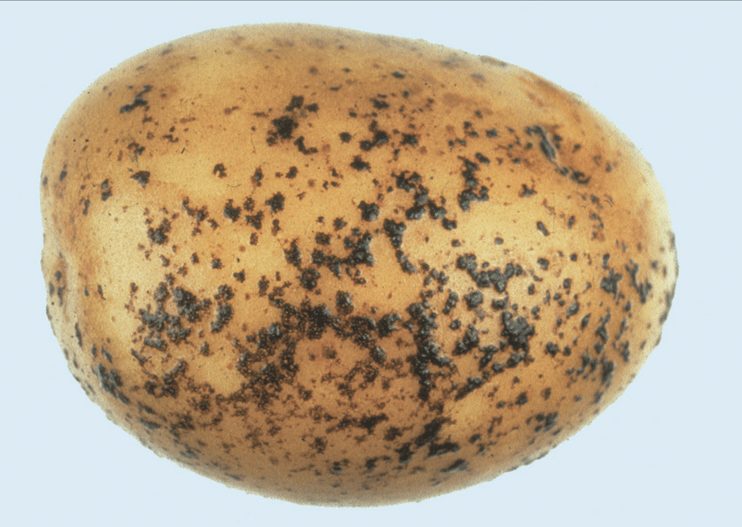 Rhizoctonia solani (Thanatephorus cucumeris) is a commonly in soil occurring fungus, which causes damage to many crops. It causes a range of symptoms in potatoes. Most damage in seed potato crops is caused by the presence of sclerotia on the tubers. This symptom is known as black scurf. Because seed potatoes infested with black scurf may have problems at emergence, the Dutch General Inspection Service for Agricultural Seeds and Seed Potatoes (NAK) has set specified standards for admissible infestation levels of black scurf on seed potatoes. R. solani is sub-divided into a number of so-called anastomosis groups (AG´s). These AG´s are specific to a single crop, or a few crops. The strain of R. solani that affects potatoes belongs to anastomosis group 3 (AG 3).

Symptoms: Resting bodies
Black scurf is the best-known symptom. It is characterized by dark, crust-like structures on the skin of tubers. These are manifest in washed potatoes because the pitch-black sclerotia are not removed by washing; they remain distinctly visible against the cleanly washed skin. They can be easily removed with the fingernail, however. Black scurf starts as small, pale grey cushions that are concentrations of hyphae, which expand and turn black within a few days (see photo at the top of this blog). The distribution of black scurf on the tuber and the size of the sclerotia may vary. Usually, the individual sclerotia are 1 mm to 5 mm thick and 1 mm to 10 mm long, but sometimes an entire tuber or part of it is covered by a black crust. The development of black scurf is accelerated by early chemical haulm destruction, as is done in Dutch seed potato production. After pulling the haulm it takes several days longer for seed potatoes to become severely infected, because in that case Rhizoctonia develops more slowly.

Prevention of black scurf
Use disease-free seed, or treat the seed potatoes, soil, or both with an appropriate fungicide. Black scurf is greatly boosted by chemical haulm killing. Haulm pulling will lead to less black scurf, but is not sufficient. ‘Green crop harvesting’ (2 or more rows are lifted, joined into 1, covered with soil again and re-harvested after the potatoes are hardened after about 2 weeks) prevents the development of black scurf to a great extent. Avoid large quantities of soil in store.

Sheets of white mycelium of R. solani at the base of stems. (Photo PRI)

Want to read more about Rhizoctonia and other potato diseases in general?
Then our Potato diseases book is what you are looking for!
Buy your copy today in our webshop!