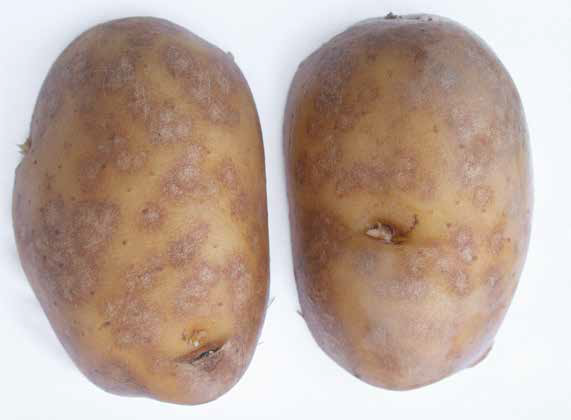 1. Silver grey patches on a tuber, due to silver scurf. (Photo PRI)

Silver scurf is caused by the fungus Helminthosporium solani. It is a very common potato disease which only develops on tubers. In the field early varieties usually become more severely affected than late maturing ones. At harvest symptoms of infection are usually barely visible. During storage however, the disease can spread rapidly. Silver scurf causes no symptoms in the foliage. This disease is becoming increasingly troublesome because in supermarkets potatoes are sold after having been washed and packed in plastic bags. Washing makes the silver scurf lesions clearly visible. Moreover, the moist microclimate in the plastic bag greatly boosts the development of silver scurf.

Symptoms
On the tuber roughly circular shaped silver grey lesions occur (Photo 1). At the end the entire tuber may become covered with silver scurf (Photo 2). If stored under moist conditions black sporophores with spores are formed which are visible with the aid of a magnifying glass. During transport and in storage in closed containers at too high temperatures affected tubers turn sooty, due to an abundant production of the black spores. Due to excessive moisture loss severely affected tubers shrivel in the course of time and do not sprout well. Symptoms of silver scurf may be confused with those of black dot. However, silver scurf lesions are usually sharply defined, while the border of black dot lesions is normally defused.

Want to keep reading about the life cycle of silver scurf and many more potato diseases in general?
Then our Potato diseases book is what you are looking for!
Buy your copy today in our webshop!