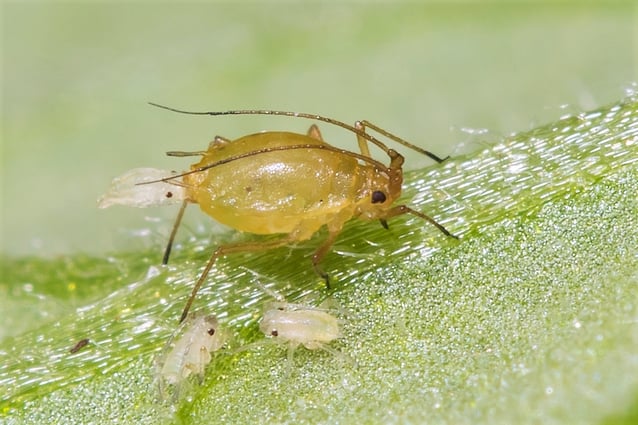 Three insects are of particular importance when it comes to potato production, with increasing optimum temperature of relative development rate (RDR). Firstly aphids, and especially the green peach aphid (Myzus persicae), as it is most efficient in transmitting potato viruses. Secondly, the Colorado beetle (Leptinotarsa decemlineata) is one of the most devastating foliar insects and thirdly potato tuber moth (Phthorimaea operculella) attacks both leaves and tubers with most damage done to the latter.

Insects have their optimum RDR at around 25 °C and stop developing at temperatures below 7 °C and above 37 °C. The temperature sum expressed as number of day-degrees from egg-to-egg stages varies in the optimum temperature that is different for the adult, egg, larval and pupa stages. Also, the longevity of the adult has another, lower, temperature optimum than the temperature needed to arrive at the adult stage.

The green peach aphid (Myzus persicae) has a life cycle that lasts close to 150 day-degrees at 20 °C, so about 7.5 days, more at lower and less at higher temperatures. Colorado beetle needs 700 day-degrees which is equivalent to 35 days at 20 °C. Potato tuber moth has the highest temperature optimum (29 °C) and needs about 340 day-degrees to complete a cycle. With a longer lasting season and 2 °C higher temperature an increase of more than 300 day-degrees is expected, which allows two additional generations of aphids. It will add one generation of tuber moth in the field, but this insect will also develop more rapidly when the tubers are stored under ambient conditions. Colorado beetle will add half a generation so will become more of a problem where it is present now and will also move, like potato tuber moth, to hitherto cooler areas at higher latitudes. The trends valid for these three pests hold for most insects with each their own optimum temperature for their relative development rate and temperature sum to complete a cycle. 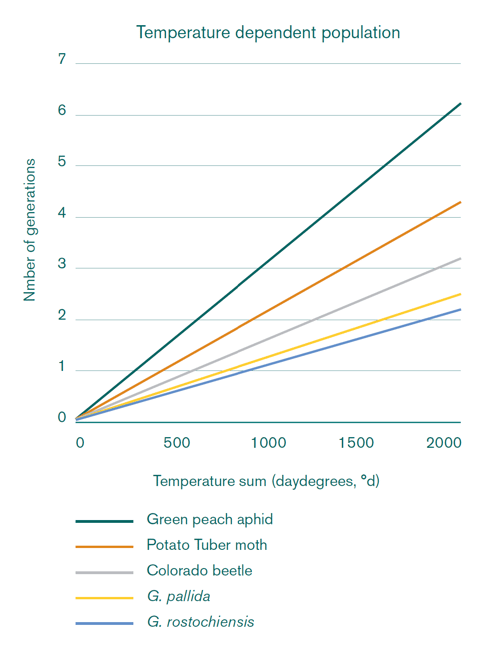 The number of generations of insects and nematodes in a growing season is an indicator of the pest pressure, as it shows the maximum development rate of the population. The actual development rate is lower by order of magnitudes due to, for instance, predation and the absence of sufficient food provided by the host. With a 150-day growing season and a temperature rise of 2 °C, 300 day-degrees (°d) are added to the temperature sum. The graph shows this is accompanied by additional generations of pests varying from about 1.8 for the green peach aphid (Myzus persicae) to 0.5 for the golden cyst nematode (Globodera rostochiensis)

Cover image:
Higher temperatures over the next few decennia add two generations of green peach aphids of which the unwinged females give birth to young females