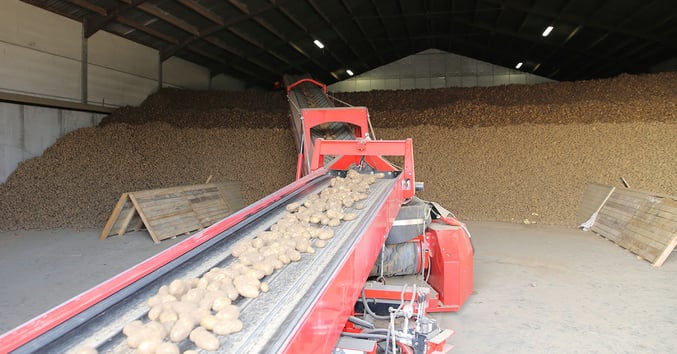 In order to be able to cool the potatoes adequately,
it is important to fill the storage cells and boxes in the most optimal way.

How to make more profit with storage potatoes!

Keep the skin intact
The skin of a potato provides protection against external influences such as infestation by fungi and bacteria. At the same time, the potato peel keeps the internal tuber intact, among other things by preventing excess moisture from evaporating. It is therefore necessary to minimise tuber damage during harvesting and storage.

There are several ways to achieve this, including effective rubberising of the bars of harvesting and sieving mats and cleaning rollers, retaining soil with the potatoes on the harvester for as long as possible, limiting the rotation speed of rollers and belts, limiting changes in product flow direction, and limiting drop heights. Hard clods, excessive haulm and weed pollen are particularly disastrous when it comes to tuber damage. This also applies to belt transitions. It is important to ensure that the potatoes land between two support rollers and not on a roller. Damaged potatoes and tubers that do not develop adequate wound healing (repair of broken skin), lose 300 times more moisture than healthy tubers.

Fill storage unit cells squarely to an even height and spread the adhering soil
In order to be able to cool the potatoes adequately, it is important to fill the storage cells and boxes in the most optimal way. The actual filling of the storage cells also requires attention, this means squarely filling in all the spaces with a flat, even top layer and preferably no sloping surface (at the end). When soil is brought into the storage area, it is important to spread this as much as possible throughout the potato heap and boxes.

Making cone shaped piles, for example, due to a stationary conveyor or storage filler, is disastrous. In those places, ventilation air will not be effectively spread through the product, which often causes serious problems during the storage period. With an even distribution of the tubers and the adhering soil, the air distribution and therefore the drying process and the temperature adjustment will be more even. However, a small amount of soil in the storage is a nice buffer for absorbing and releasing moisture during the storage period.

Ensure an equal temperature in the storage unit
As for the state in which the potatoes are brought into a storehouse, it is of the utmost importance to even out the sometimes very different tuber temperatures within the storage unit. These differences are caused by both varying temperatures during the harvesting period and changing 24-hour temperatures. Temperature differences of up to 7 degrees Celsius between tubers within a cell are no exception. For an optimal storage period, varying tuber temperatures are not a desirable starting situation. It may cause moisture from the heated air (heated by the warmest tubers) to condense on the colder tubers in storage. This is the greatest risk during the first 24 hours after the potatoes have been put into storage. It makes no difference whether the potatoes are in boxes or in bulk storage.

The easiest way to achieve equal temperatures directly after storage, is with internal ventilation. It is possible, for example, to set the (overhead/sliding) doors ajar so that during the often colder nights, moist air can be removed from the storage space. According to the laws of physics, the often warmer storage air will always flow from the inside to the outside when it is colder outside. An additional effect of this is the discharge of excess CO2 gas, which is a result of the continuous and still relatively rapid respiration in the freshly harvested tubers. Conversely, when the temperature of the outside air is higher than that of the product inside, that warm air will flow in. This is, of course, undesirable, because it can cause condensation on the potatoes. It is therefore important to measure the potato temperature immediately after storage.

Dry the product at the same product temperature
As soon as all the tubers in the storehouse have the same temperature, the cold potatoes, possibly with the help of a heater, will have warmed up a little and the moisture on the tubers will have spread throughout the storage space. Only then it is time to dry the product with (drying) outside air. It is very important to drain the excess moisture around the tubers as quickly as possible, so that the wound healing and cork formation of the skin is as smooth as possible.

Drying should remove the moisture in the soil from the storehouse as quickly as possible; the same applies to any rotten tubers. Depending on the condition of the stored lot, this often takes several successive days and several hours of drying per day. It is important to watch the product very well. The drying of the tubers must be checked regularly and the drying process must be stopped in good time to prevent moisture being drawn from the tubers themselves. 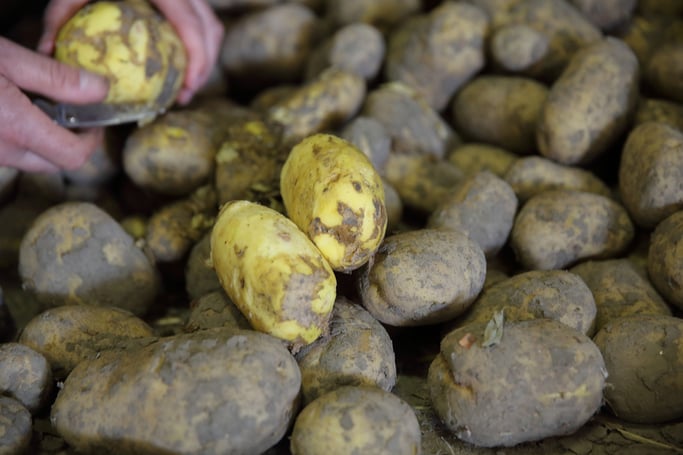 It is necessary to minimise tuber damage during harvesting and storage.