‘Keeping gene-editing outside Europe is a false security’

The content of this blog is part of the article 'In ten to fifteen years’ time, the whole variety package will have been turned upside down', published in PotatoWorld magazine 2020/03.

‘If you see what we’ve achieved in 150 years of potato cultivation, it’s in stark contrast, for example, to the breeding of sugar beet and maize. By making very specific adjustments in the DNA with certain techniques such as CRISPR-Cas, you can make rapid and significant progress, especially in the current clonal potato varieties’, says Gerard Backx, CEO of HZPC.

‘In Europe, however, the gene-editing technique is legally labelled as GMO, whereas in North America it is an approved method of potato cultivation. Because we have a lot of confidence in this method, it means that here in Metslawier we develop varieties in the lab and send the interesting specimens to North America to be trialled in the field. We send them, like classically-grown varieties, as in-vitro plants. Upon arrival, we must indicate the technique with which the variety was developed. We must also declare that we haven’t put in any foreign DNA, for example. When this is approved, the variety will fall under the classic breeding category and we don’t have to communicate this any further. This is a big difference from Simplot's Inate potatoes, which are already approved in America and developed through GMO techniques. You do have to communicate this to the consumer, because you’re introducing very specific DNA with different techniques. But the use of gene-editing, such as the CRISPR-Cas method, doesn’t have to be shared with the market. The competition won’t know that either. This means that as soon as such a variety has been admitted to the North American market, anyone can start crossing it and then build in effective resistances in new varieties. This means that a gene-edited variety can also be used as a crossing parent in the future. Because we do know the origin, we won’t do that ourselves, as we don’t think it’s ethically justified. But if Europe thinks they can keep gene-editing out, they’re creating a false security. After all, with varieties coming to Europe, you’ll no longer know which varieties have been created with gene editing or which originated from crossing them. With hybrid breeding you can achieve even faster results with gene editing than in classic breeding’, Backx explains the future of breeding work. 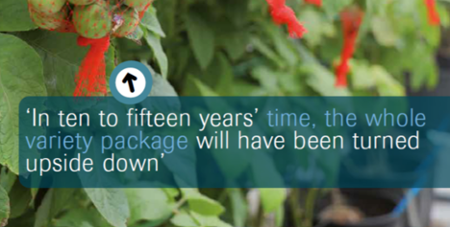