A fully mechanized harvester lifts the tubers by chisels and places them with soil on the conveyor bed. The soil is sieved and belts convey the tubers into a hopper that is emptied into a waiting trailer. Machines without a hopper drop the harvest directly into an accompanying trailer. The machine either or not is provided with a platform where people do the sorting of mother tubers and tubers with defects and non-tuber particles such as stems, clods and stones. Most of the foliage is removed by two fluted rollers that turn in opposite directions behind the lifting conveyor bed. Some remaining foliage is sorted together with stones and clods. Where an excessive quantity of stones is present in the soil, the machine, if equipped with a separator, separates stones from the tubers after lifting by subjecting them to an upward air flow created by a ventilator: the lighter tubers are moved up while the heavier stones drop. To increase the speed of operations locally, a two-row lifter picks up the tubers and deposits them in between two adjacent rows. The harvesting machine subsequently lifts those two rows including the deposited tubers in one go, whereupon a truck transports the harvest to the store or to the company that procured them for processing or packing.

There is a tendency in high-tech agriculture to move away from the single row harvester to multiple rows that are pulled or self-propelled. The increase of scale has a few draw-backs such as a more frequent occurrence of clods and foliage that need to be removed with specially designed (corrugated) sets of rolls turning in opposite directions. An increasing speed of machines, belts and potato flows requires more precise fine tuning of depth of the lifting scissors (1 cm deeper lifting infers that more than 50 tons per hectare of soil is lifted and sieved) as well as the use of padded belts that soften contact with the tender potato skin; hedgehog conveyor belts serve the same purpose. Fully mechanized potato harvesting without previous haulm killing when the crop is still green and growing, requires operations by a machine that pulls the haulms followed by a harvesting machine. The skin of the immature tubers comes off to a large extent. The lorry brings the raw material to the processing factory where steam peeling removes the remainder of the skin after which cutting, blanching and frying takes place. The period between lifting and processing does not exceed six or seven hours thus not enough time for damaging enzymatic processes to occur such as enzymatic polyphenol oxidase caused formation of black spot. 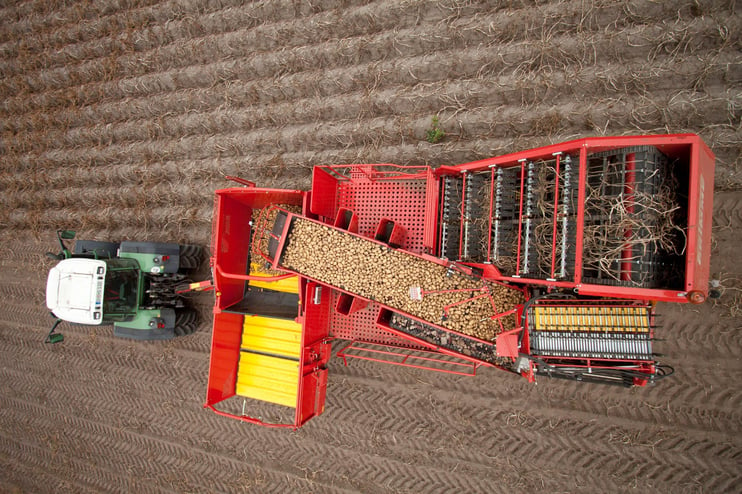 A fully automatic harvesting machine lifts the tubers, separates them from clods and parts of the foliage and deposits them in an accompanying vehicle or a bunker.

Want to keep reading about the potato crop and harvesting methods?
Our Potato handbook is a global potato university in 1 book!
Buy your copy today and get a one-year free subscription to PotatoWorld magazine.