The content of this blog is the World of Potato Research column published in PotatoWorld magazine 2020/04.

Precision agriculture is a farming management concept based on observing, measuring and responding to inter and intra-field variability in crops. How does this apply to weed control in potatoes? Let us have a look at variable rate application of soil herbicides.

Weeds have to be controlled in potato crops in order to obtain an economic yield. Herbicide weed control has become the standard in current potato production. Farmers often choose for application of a soil herbicide shortly after planting the potatoes and/or ridging. Later on, they may apply post-emergence herbicides to control residual weeds. And herbicides are generally sprayed uniformly over the whole field in a fixed dose. Societal concerns of herbicide use, has led to a worldwide search for weed control that uses less or no herbicides. New (potential) strategies are (1) variable rate application of soil herbicides, (2) weed detection and targeted application of post-emergence herbicides, and (3) replacement of herbicides by non-chemical weed control methods.

In this article we present results of the first strategy. Efficacy of soil herbicides is generally affected by the amount of soil organic matter and clay in the soil. If higher, a higher dose of the herbicide is required to obtain a good level of control. For this reason, soil herbicides often show poor efficacy of peat soils with soil organic matter contents of more than 25%. If farmers have digital maps of the spatial variation within their fields, they can use these maps to make task maps for variable rate dosing of soil herbicides. Wageningen University & Research developed dosing algorithms for a wide range of soil herbicides. How this works is shown in the figures 1-3 below. The data come from an IoF2020 project demonstration experiment on a farm with a clay soil in the West of the Netherlands in spring 2020. The figures are print screens of three steps in the Akkerweb Soil herbicide app to make a machine ready variable rate herbicide task map. On Figure 1 you see the variation in clay content of the soil of the demonstration field. The soil map was made with a Veris sensor system. On Figure 2 you see the dosing map for Boxer herbicide based on the available dosing algorithm. The higher the clay content, the higher the dose. In Figure 3 you see the machine ready task map in spray volume and the settings of the farmers Kverneland sprayer.

Results with soil map based variable rate application of soil herbicides with sprayers that can vary the dose of the whole width of the spray boom are in the order of 35% when compared with statistics on average use of the herbicides in The Netherlands. The net return of this type of herbicide weed control becomes positive only if a higher yield is obtained. The savings on herbicide costs do not cover the costs of the soil maps and the technology. A higher yield is likely because the crop plants are less effected by the herbicides on the places where the dose is reduced. And in such a case yield increases of several percent have been observed. 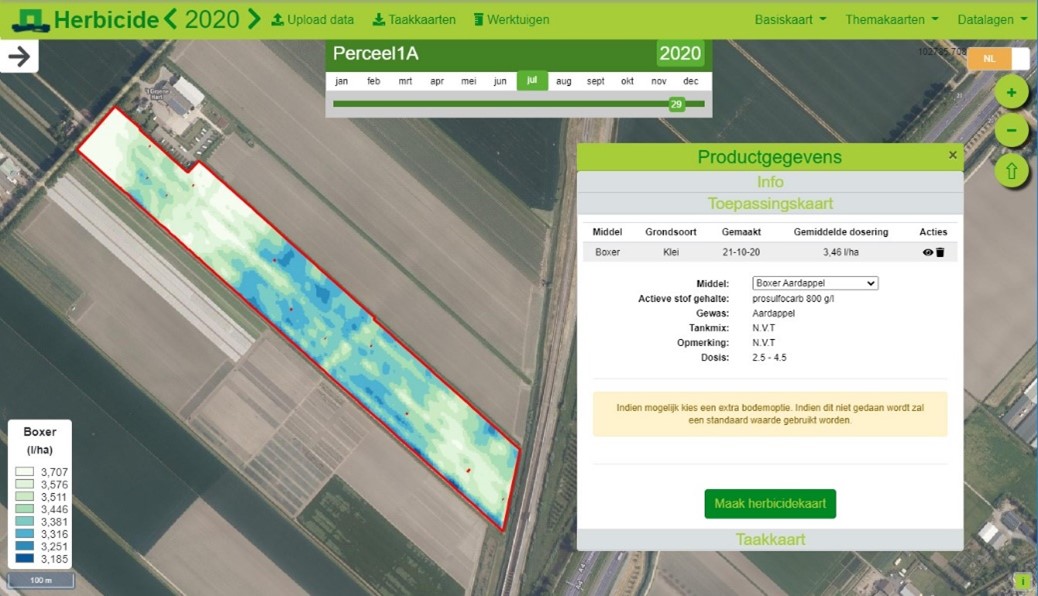 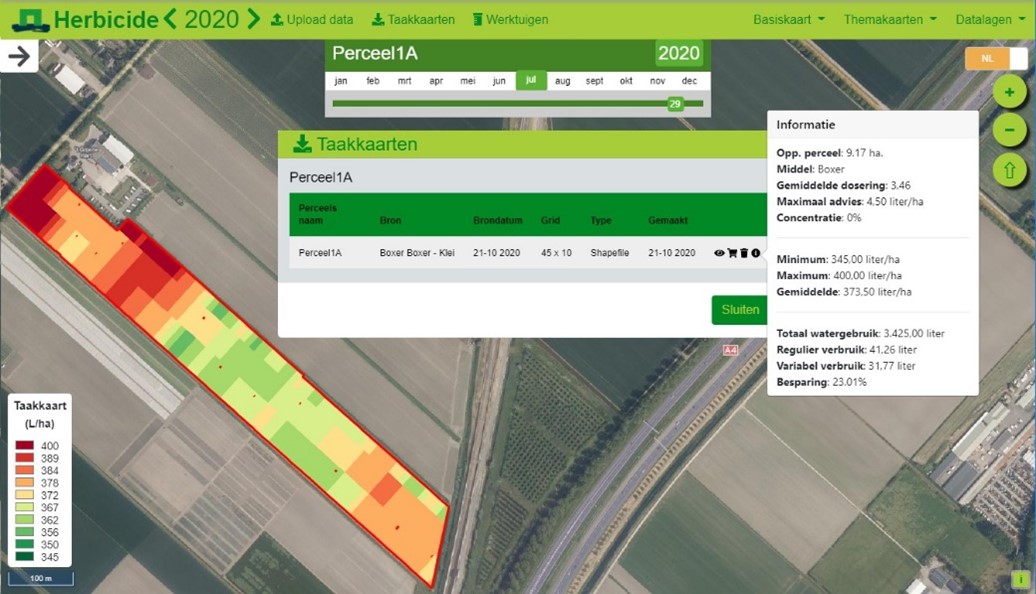 Precision agriculture has the promise to produce more with less and better, giving benefit to potato farmers, potato value chains and society. In the case of soil map based variable rate application of soil herbicides both farmers and society can benefit. More information can be found in the paper referenced.

References
Figure 1-3: Print screens of the Soil Herbicide App on Akkerweb
The internet of arable farming
Advances in Variable Rate Technology Application in Potato in The Netherlands

Want to keep reading about the potato crop, potato production and weed control?
Our Potato handbook is a global potato university in 1 book!
Buy your copy today and get a one-year free subscription to PotatoWorld magazine.