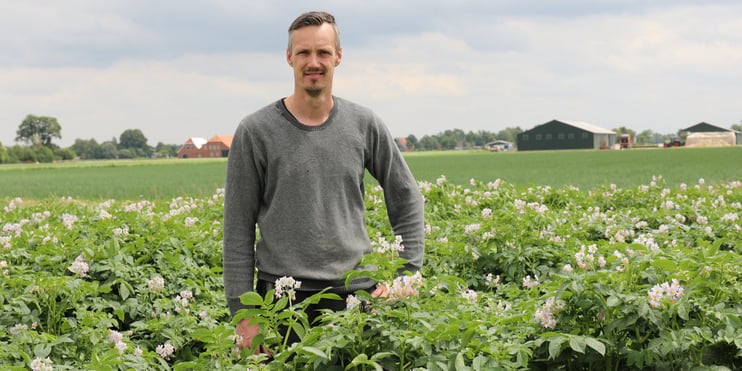 For this series, PotatoWorld’s Jaap Delleman and Leo Hanse have written up stories of European growers storing potatoes without Chlorpropham.

In Europe, the European Commission has decided that potato growers are no longer allowed to use Chlorpropham in the storage of potatoes. This ban on the product used for decades to store ware and starch potatoes is a real game changer in the European potato sector. Innovative Dutch growers are sharing their initial experiences with the new agents that best suit the variety, cultivation purpose, available finances and storage conditions.

This week: Johan Koop from Emmer-Compascuum (Pictured above)

In the village of Emmer-Compascuum, Johan Koop of the De Wissen General Partnership grows about 80 hectares of potatoes. This year, for the first time, he used the Restrain company’s ethylene pesticide as a sprout inhibitor. ‘As the profit margin of our crop is small, we need a sprout inhibitor that costs little and works well’, Koop says.

All we have is a story and a photo of a flowering potato crop, because the storage potatoes at Koop’s have long since left at the end of June. In total, the farmer grows 80 hectares of potatoes. These are mainly marginal crops, as he himself calls them, with starch and flakes as their final destination. A part is consumption of the Innovator French-fry variety, which are grown just across the border in Germany. After harvesting, the starch potato lot is placed under a tarpaulin: a layer of straw on top and the potatoes are left until the end of December when the first batch is transported to the starch factory. This delivering ‘from the pit’ continues until the end of January. After harvesting, the part intended for flake production is kept in the storehouse, which provides space for about 1,000 tons of produce. It is still a relatively new storehouse built in 2012 in which Chlor-IPC has never been used. The potato grower doesn’t want that either, because until the end of September he dries his own seed potatoes and onions in the same storehouse so Chlorpropham has never been welcome.

Inexpensive product
Varieties that Koop has chosen for the flake industry market are Allure, Saprodi and Novano. These are varieties with good tolerance and resistance to wart disease and nematodes, he explains. In recent years, these harvests were mostly stored until the end of February. To keep them sprout-free until then, Koop treats his crops with MH while still in the field. ‘This treatment is necessary for long storage to be successful. An additional advantage is that in subsequent crops such as onions and sugar beet, we hardly ever have volunteer potato plants. ‘The reason for experimenting with preservatives is that we want to increase our income by storing these varieties longer and distributing the work more on the farm. That’s why we started looking for the best application for us. As the profit margin of our crop is small, we need a sprout inhibitor that costs little and works well. The cheapest at the moment is ethylene. This product is also best suited to our way of storage. We work with above-ground suction ventilation, which allows us to distribute ethylene well. Together with the Restrain supplier, we treated a cell containing 500 tons of Allure. We’ve been growing this variety for years now and we know exactly how to store it. We can make good use of this knowledge when storing with ethylene for longer periods. In any case, it’s important for storage to store the product fully matured, which was quite a challenge this year because of the wet autumn. Nevertheless, we started with a healthy and clean product. We started the first treatment around Christmas. We delivered the potatoes at the end of April. The delivery took a week and that’s definitely the maximum. Ethylene only suppresses sprouting and as soon as you stop administering the product, sprouting quickly starts again. And, in our situation, once you start delivering, you can’t continue gassing. It’s important to keep applying it, because you need to keep the concentration of ethylene at the desired level during the entire storage period. So emptying a cell over longer periods is not an option for us with this preservative’, Koop explains.

Want to keep reading about this grower and other growers' experience with replacing Chlorpropham?
Download the full PotatoWorld magazine article on potato storage without Chlorpropham for free: