Potato sorting involves the removal of unwanted rotten or odd-shaped tubers, clods, stones and other foreign bodies such as crop remains or pieces of wood. In subsistence and semi-mechanized systems, sorting is done while hand-picking the wanted hand-dug or windrowed tubers from the ground and leaving unwanted ones behind. Not-potato particles Unloading potatoes stored in bulk is done with a shoveling device or a common forklift with a loading bucket are not taken in at all. In mechanized potato production systems, sorting reduces the amount of material to be transported and stored, so it reduces costs. Customers give a bonus when tare is less than the maximum quantity agreed upon and give a malus when the tare exceeds it. Removal of rotting tubers reduces the risks of contamination in storage, thus reducing storage loss. The whole line of potato tubers moving from the soil to entering and leaving the store, offers a number of opportunities to carry out sorting. The harvesting machine is either or not supplied with a platform where personnel sorts the tubers that pass on an inspection table. The potatoes are placed on a flat conveyer belt or a series of rollers that move the potatoes, thus turning them around and exposing all sides to the sorter. The hopper at the receiving end of the store is equipped with a similar inspection table or sorting unit. Also upon store unloading and delivery (or storing anew in case of seed tubers), there are opportunities to sort and grade potatoes.

Brushing or polishing table potatoes before optical or visual sorting with a mechanical brushing machine that removes caked soil, eases inspection. Brushes are straight or undulated and the pressure on the tubers is adjusted by a variable rubber mat depending on type and severity of adhering sand and clay. Alternatively tubers roll in a drum of brushes or scrapers. Here no pressure is exerted but a rotational speed. Sorting is done by the eye when tubers pass on a flat bed or roller and unwanted material is removed by hand and deposited in bags or by a small belt that delivers these items into a container. Optical sorting equipment for unwashed potato tubers is also available. This considerably reduces the amount of labor involved. Sorting of tubers with scab, scurf, clay caps, worm damage, deviating color due to greening or a different variety is also possible through optical sorting systems. The deviating tubers are detected by a camera system, followed when leaving the observation compartment and diverted by means of a thrust of air or valves into disposal bags or containers. Such equipment also automatically grades into pre-set sizes. 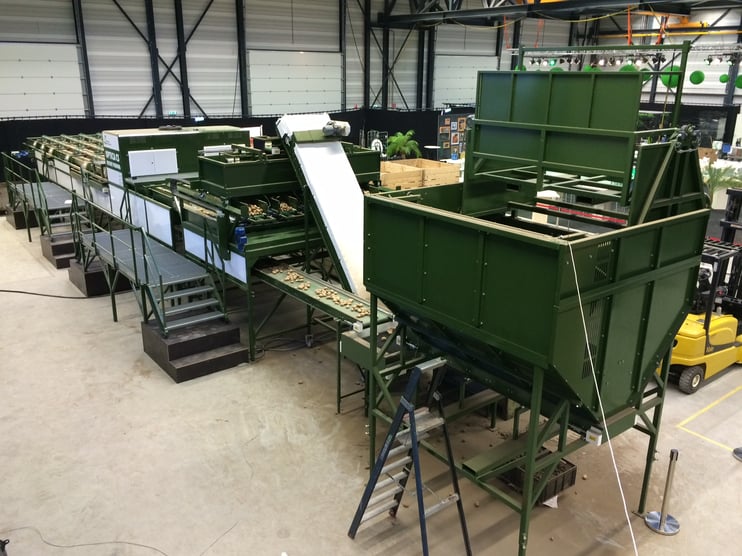 In an optical potato sorting machine, cameras take many pictures of individual tubers and gather information about their size (dimensions and weight) and surface defects (cuts, clay caps, scab, scurf). Leaving the camera compartment, in some equipment, tubers are graded into specific and narrow classes according to need (e.g. the 50–55 g with less than 5% black scurf class). Besides large-scale grading and sorting, such machines are well suited to determine processing value of tuber samples at factory inlets.

Want to keep reading about the potato crop and the sorting process?
Our Potato handbook is a global potato university in 1 book!
Buy your copy today and get a one-year free subscription to PotatoWorld magazine.