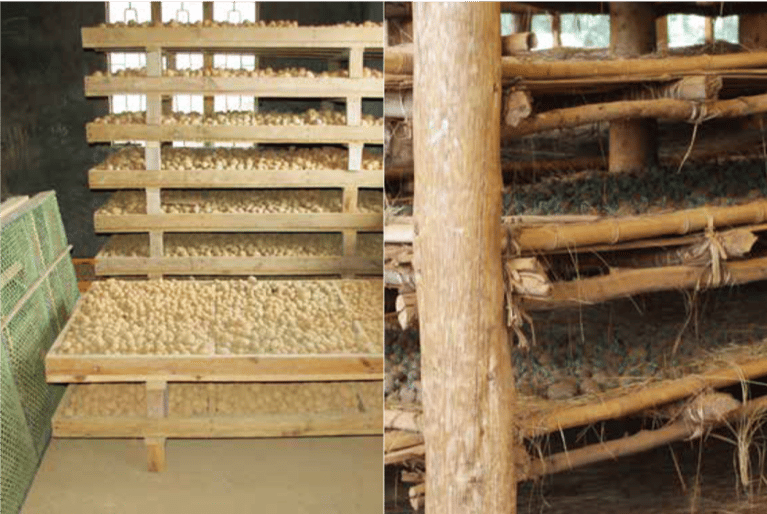 Pre-sprouting by raising the temperature in the store until the white chits appear and subsequently exposing the tubers to light for several weeks in boxes or netted bags to allow the sprouts to become green and sturdy, is a common practice. When handled and planted, the spouts break off less easily than white elongated sprouts. This reduces wounding of the tuber and transmission of diseases. Moreover, such seed tubers emerge earlier which extends the number of growing days of the seed crop and increase its yield.

Seed crops usually are defoliated prematurely to avoid the spread of viruses so an earlier emergence especially under such conditions increases the yield. An earlier emergence also makes the crop more competitive against weeds and Fusarium and black scurf (Rhizoctonia solani) , two fungal diseases that are more apparent in slow emerging crops. Pre-sprouting, finally, leads to physiologically older crops which earlier in the season make them resistant to virus infection.

Moreover, storing seed tubers in diffused daylight or lamplight helps in reducing apical dominance. When storing at high temperatures in the dark, etiolation (lengthening and white coloration of the sprouts) occurs which weakens the sprouts and leads to breaking and removal when handling at planting, especially by machine. In tropical highlands, storing in diffused light lengthens the optimal storage period and in temperate regions it is especially used by seed growers and organic growers to hasten emergence. This is an advantage to arrive at acceptable crop yields before the onset of epidemics of virus transmitting aphids and late blight.

In areas with short growing seasons due to the long winter periods such as in North-East America in Maine and North-East Asia such as in Heilongjiang in China and Hokkaido in Japan, it is also helpful to lengthen the above ground crop cycle. Because of the low spring temperatures with freezing nights, pre-sprouting in the light here only works when done inside a building with artificial light. When there is only risk of frost during the night, trays or transparent netted bags are brought inside a frost-free building for the night. 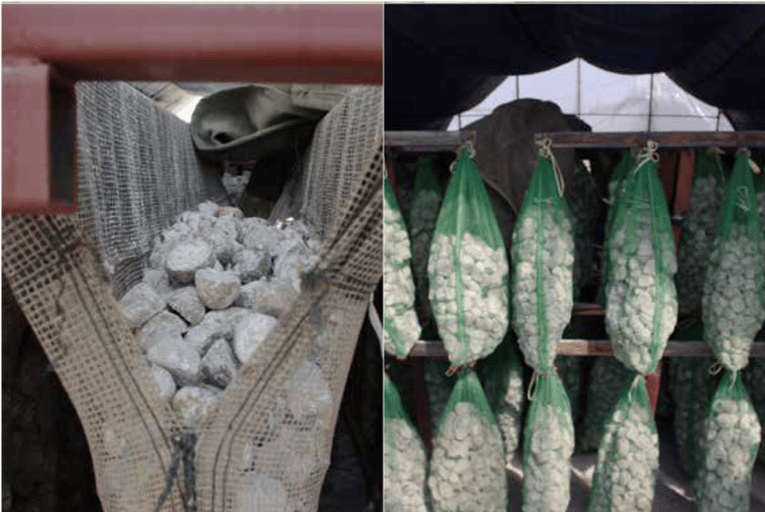 Pre-sprouting of seed tubers in the light takes place in trays and in diffused light stores in frost-free areas. When placed in netted bags they are brought inside in the evening if there is a risk of frost.