The need for Potato storage 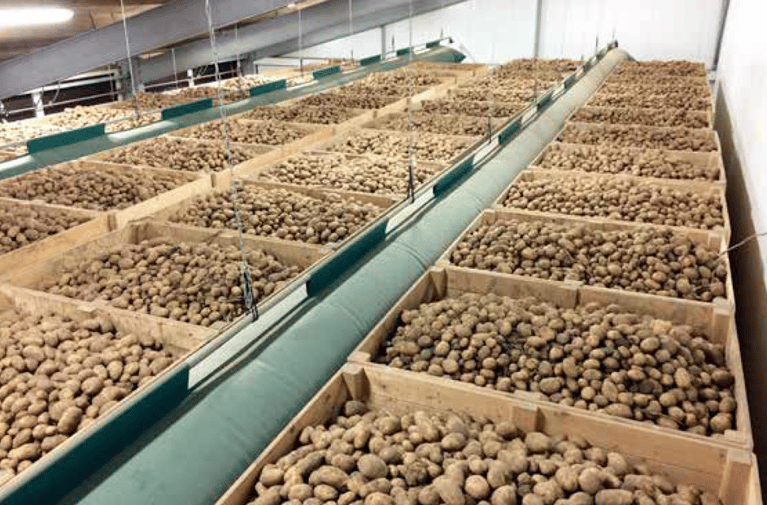 Different physical and socioeconomic potato environments have different storage needs, periods and conditions. The storage period varies from a few days between harvest and delivery up to almost a year. Where delivery is not immediately upon harvest, tubers are usually stored in bags in intermediate tech conditions, in baskets or a heap in low tech production systems. In high tech conditions delivery is either ex-field or ex-store in bulk or in boxes. When stored for commercial purposes, this is done for at least one or two months. Delivery directly from the field saves storage costs, so traders and factories collect the tubers at harvest time, stretched from early to late as much as possible. This yield (not too much yield loss is accepted) and weather (should allow harvesting) permitting.

Globally, refrigerated potato storage is still increasing. In tropical and subtropical conditions, refrigeration is needed if the storage period exceeds a month or so. This, however, often is too costly and investments lack such as is the case for ware potato in the Red River Delta in Vietnam and in East Africa. Here the costs of storage are not recovered in higher prices. In Vietnam because consumers are not willing to pay a high price for the local product outside the harvest season and potato enters massively from China. In East Africa because two or three growing seasons per year supply the market with fresh potato almost year round. In the North of China, the trend is rapidly changing from ambient to refrigerated storage. For processing in factories operating year round, tubers also have to be stored during part of the year when temperatures are well above zero. In temperate climates this means keeping tubers warm in winter and cool in summer.

The crop when harvested in moist soil, upon deposition in the store is dried with cold air that warms up from the tubers and then can contain more water. Alternatively, tubers are dried by air that is warmer than the tubers but has a dew point that is higher than that of the tubers. If the dew point is lower than that of the tubers, the tubers will get wetter as the water vapor in the air condensates on the tuber. Drying with air that is much cooler than the tubers, during the night for instance, has a disadvantage: it cools down the tubers too much which may make it impossible to keep drying during the day. Occasionally it is necessary to dry the crop rapidly, when there is a risk of silver scurf development on wet tubers. Then growers heat the air during the night with a heater. When the outside temperature is below 0 ⁰C it is mixed with inside air in a specific designated space or by only opening the inlet shutters marginally.