The content of this blog originates from the World of Potato Research column published in PotatoWorld magazine 2021/02.

Precision agriculture (PA) is a farming management concept based on observing, measuring and responding to inter and intra-field variability in crops. Spatial optimization of planting density of potatoes is high on the wish list of farmers.

A recent online survey shows that Dutch farmers have basic PA technologies like Global Position systems and Isobus terminals for machine control (see Figure 1). A smaller yet significant part already uses these technologies in variable rate applications. And we see that this interest in e.g. in applying variable rate planting density (VRPD) is increasing, if only that 6 of 18 arable farmers of the National Field Lab Precision Agriculture apply VRPD in potato crops. They want to optimize yield, quality and efficiencies in this way.

Basically, there are two ways to do VRPD. We see farmers varying the planting density on their fields by manually changing settings on the terminal that controls the planter site specifically (Figure 2) When more and/or advanced technology, connectivity, data and knowledge are available, we see more automated VRPD based on soil or yield potential maps and decision support. Most modern planters today are well prepared for VRPD of potatoes.

Still a key question is how to vary the planting density in the best way. Farmers ask for science based decision support. A general principle is that planting density can be increased when the growth conditions are better than average, and decreased when worse than average. )On sandy and peat soils, we see that soil potential maps are being used for the VRPD. These maps are based on soil maps made with sensors, expert judgement of spatial variation in soil properties, and/or historic crop biomass. On clay soils, we see that a clay content maps are often the basis for VRPD. Seed quality, shadow zones and sprayer tram lines are also taken into account. The aim is of all VRPD applications is to arrive at an optimal site-specific stem density around canopy closure time. The optimal stem density is variety and cropping purpose dependent, which makes that decision support should be based on several factors. Figure 3 shows the step from soilmap to planting density map using decision support that takes into account clay content, shadow and seed quality. 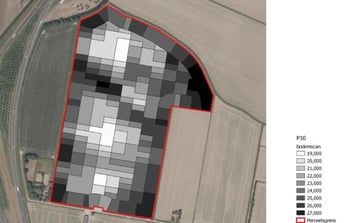 During the recent final IOF2020 event, we launched a multi-vendor webservice for decision support on VRPD. IOF2020 is an EU investment in Internet of Things in AgriFood. In the arable trials of IOF2020, we had three potato use cases and several stakeholders joining forces to improve soil map based VRPD of potatoes. The webservice offers science based VRPD decision support and can be used on planters of different vendors. Machine manufacturers can link to the webservice via their own portals and IT-services via API. On farm testing of use of the decision support on the smart planters of three participating machine manufacturers is ongoing in 2021. We hope to show not only higher crop yield and quality by the VRPD, but also that a joint approach in the automation of the decision support, data processing and application will improve ease of use and adoption of VRPD. Each vendor still has the option to control the data and information flow according to own systems. In addition, farmers can use the webservice via the WUR data platforms Akkerweb / Farmmaps and connect from there with the portals of the machine manufacturers. We hope to show the results of the on farm VRPD tests during PotatoEurope in Lelystad, September 2021.

Want to keep reading about the potato crop?
Our Potato handbook is a global potato university in 1 book!
Buy your copy today and get a one-year free subscription to PotatoWorld magazine.