Unlocking food from the potato tuber: the need to heat 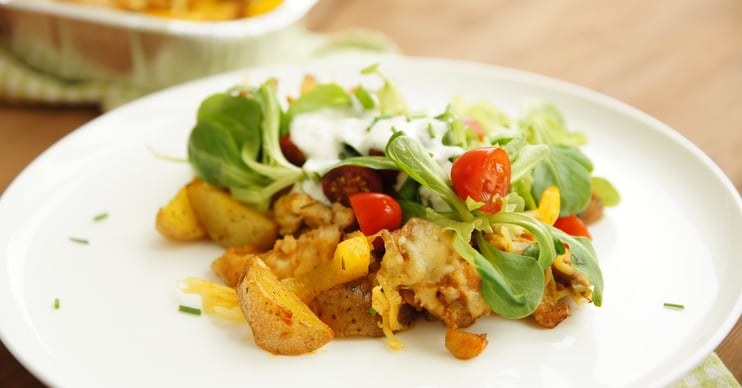 Unlike some other vegetables like tomato, onion, carrot and cabbage that can be eaten raw but often are also prepared in the kitchen, potato always needs to be heated.

Unheated potato is unappealing, not tasty and indigestible for humans. When consumed by a human, uncooked potato passes the stomach and the upper intestines unaffected. In the lower intestines, the colon, potato starch granules ferment while producing gas giving rise to flatulence.

Starch is the most widely eaten carbohydrate by humans, it is the main source of energy and is derived from cereals and starchy root and tuber crops. Starch consists of two components: amylose (one-fifth) and amylopectin (four-fifths), both of which are polymers of glucose. Amylose contains thousands of glucose molecules in a helix structure. None is present in waxy potatoes that only contain amylopectin. Waxy tubers do not color dark with iodine whereas amylose does. Amylopectin contains over one million glucose molecules and has many branches.

When a potato tuber is heated, the starch granules absorb water. First the amyloplasts (starch containing vesicle within cells) burst, then the cell walls disintegrate. The starch turns gel-like so it gelinates and becomes digestible. In the starch industry, pure potato starch is heated, it swells and becomes viscous, clear and viscous again when cooled. Hence, its use to thicken sauces, soups and custard with potato starch is more effective than that of maize and wheat. It is also applied as a glue. When left alone for a long time, the amylose in the starch loses water and takes its original crystal shape again. This process is called retrogradation. Waxy potato devoid of amylose is less viscous and hardly retrogrades.

Stir frying potatoes is done with small parts of potato only, such as grated tubers.

Want to learn everything about the potato? Check out our Potato handbook!

The Potato handbook, a global University on the Crop of the Future in one book.
Buy your copy today and get a one-year free subscription to PotatoWorld magazine.