Potatoes are graded according to sizes as required by the users. Smaller seed sizes fetch higher prices than large one per kg because per kilogram they yield more stems in the field when planted. Larger ware potatoes fetch a higher price than small ones because they yield more kg of chips and crisps per ton raw material than smaller tubers. Consumers in Europe prefer medium sized tubers, in Japan small ones, in North Africa large ones and in Xinjiang in West China consumers prefer huge tubers.

Grading before delivery is a standard practice by growers unless the tubers are delivered exfield to the clients, processor or packer, who do the grading at their facilities. In subsistence and local economy settings, the tubers, if they are separated at all, are divided into three classes by eye and by hand—small, medium and large. Often the small ones go as seed, the medium for own consumption and the large ones for sale. An example of an optical aid to standardize this sizing in samples, not necessarily devised for developing countries, is the Spud-O-meter issued by the USA Washington State Potato Commission. This series of paper imitations of Russet Burbank tuber profiles allows the observer to estimate the number of tubers contained in a 50-lb carton (one pound equals 0.45 kg, so one carton contains 22.5 kg), which varies from 40 to 110 tubers. For example, the profile matching the count of 50 tubers corresponds with tubers weighing on average 16 ounces (one ounce weighs 28 g) i.e. 448 g. This method is used in assessing tuber lots from different origin and quickly estimating the market value of samples but not of large quantities prepared for distribution. 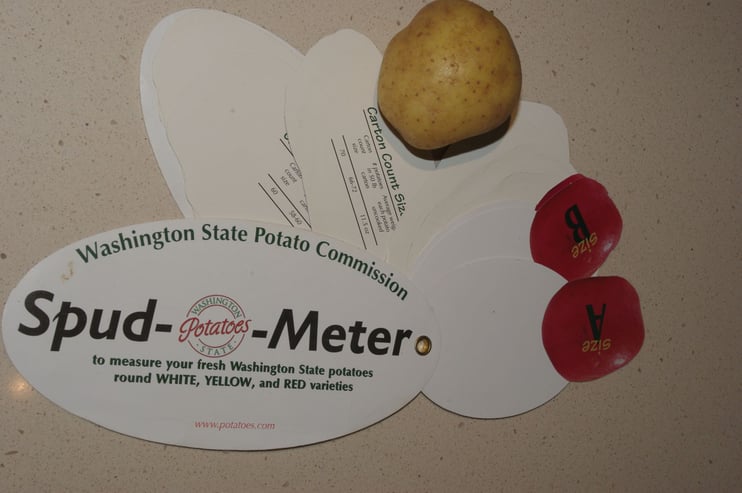 The Spud-O-meter, issued by the USA Washington State Potato Commission, is an example of an optical aid to standardize this sizing in samples.

Want to keep reading about the potato crop and the grading process?
Our Potato handbook is a global potato university in 1 book!
Buy your copy today and get a one-year free subscription to PotatoWorld magazine.