What effect does climate change have on fungal potato diseases?

When potato originally was introduced from South America to Europe and from there was distributed globally, hardly any diseases and pests came along.

Possibly initially only healthy true seed was brought on the ships and no tubers with diseases crossed the ocean. The first widely reported incidence, disaster rather, of an introduction of a major disease was that of late blight caused by the oomycete Phytophthora infestans. It came to Europe with diseased tubers from North America in the mid-1880s and was responsible for food shortages, famine and mass emigration, especially in and from Ireland.

Late blight now is present in all potato-growing environments. The first introduction was of a single clone (A1), which multiplied clonally but was followed from Mexico over 100 years later by another mating type named A2. The two now reproduce sexually and the disease has become more severe and persistent. The A2 mating type has spread by wind and with table and seed potatoes to most potato growing areas with still exceptions in Eastern and Southern Africa, a few Asian countries and the West of South America from Colombia to the South of Chile.

For blights caused by the water mold (oomycete) Phytophthora infestans (late blight) and the fungus Alternaria spp (early blight), a relative development rate (RDR) or an infection day is defined as two consecutive days for late blight and just one day for early blight with a relative humidity constantly above 75 percent and with temperatures not lower than 10 °C and not higher than 26 °C (for Phytophthora) or 35 °C (for Alternaria). Both low and high temperatures reduce growth and multiplication of these two organisms. When these conditions are met on a particular day RDR is 1, if not 0.

The accumulation of the daily RDR (cRDR) of late blight does not increase in winter potato crops, where temperatures in mid-winter are suboptimal and daily drop below 10 °C. This is also valid for very high highland crops, well above 3,000 m above sea level. There are fewer such cool days in the next 40 years in Punjab in India, in the Nile Delta in Egypt, or in the Andean highlands. This here and there leads to a substantially (up to 50 percent) higher frequency of occurrence of the disease necessitating a more intensive control. Further south, in Gujarat in India and at the Upper Nile in Egypt in winter and further downhill in the highlands, no less days with temperatures below 10 °C occur, so there late blight is not affected by climate change. In environments with summer crops in temperate climates and in temperate highlands there will be more days with temperatures over 26 °C, so in this environment the disease pressure goes down in the middle of the growing season but is compensated by a longer growing season with in the end an unchanged cRDR and a similar intensity of control as a result. Early blight has a higher temperature optimum than late blight, so the pressure in winter crops hardly changes and in a summer crop the pressure increases necessitating a more intensive control. 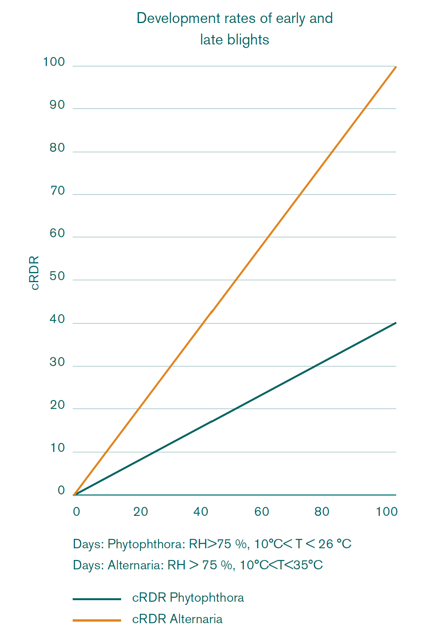 Want to keep reading about the effects of climate change on the potato crop and potato diseases?
Our Potato handbook is a global potato university in 1 book!
Buy your copy today and get a one-year free subscription to PotatoWorld magazine.