What is there to know about degeneration of seed potatoes

Seed tubers (seed potatoes) within and between lots differ in health status.

Compared to other annual field crops, such as wheat and maize that also need to be sown every cropping season, the potato crop is special in several aspects. The main difference is that the potato crop is multiplied vegetatively. Like other vegetative means of reproduction of the potato crop such as planting stem cuttings or sprouts, any contamination with diseases or pests of the vegetative propagation material is also contaminating the next crop grown from it. With each field generation more and more contaminating agents, pests and diseases accumulate, leading to a gradual degeneration of the seed stock.

The relatively rapid degeneration of potato compared to crops multiplied by seed is the main reason for the benefits of creating a comprehensive seed potato production system parallel to the production system of tubers destined for the market. It is possible to grow potato from true seed (TPS) where hardly any diseases are transmitted. Potato Spindle Tuber Viroid (PSTVd) is an exception.

Establishing a crop from botanical seeds for commercial reasons is slow so far and leads to low yields compared to crops derived from seed tubers. The use of TPS as basic seed material, however, is being developed using hybrids at the diploid level. The seedling tubers produced are used as seed tubers, similar to the use of mini-tubers.

In the Netherlands, 3.5 t of seed is planted in seed production and the yield of seed tubers is around 30 t/ha. Ware growers plant 2 t/ha and harvest around 50 t/ha, a multiplication rate of 25. In South Africa, the seed rate is close to 4 t/ha and the yields ar ound 40 t/ha, a multiplication rate of 10. There is a tendency that in environments with relatively low yields and much yield variation among years due to hazards as drought and heat waves, growers avert the risk by investing in relatively more starting material. The multiplication rate of cereals is considerably higher than of potato, 50 to 100 depending on the crop. When taking into account that certified potato seed tubers on average are at least twice as expensive as ware potatoes, the multiplication rate in monetary terms of ware potato is not 20, but 10 only. 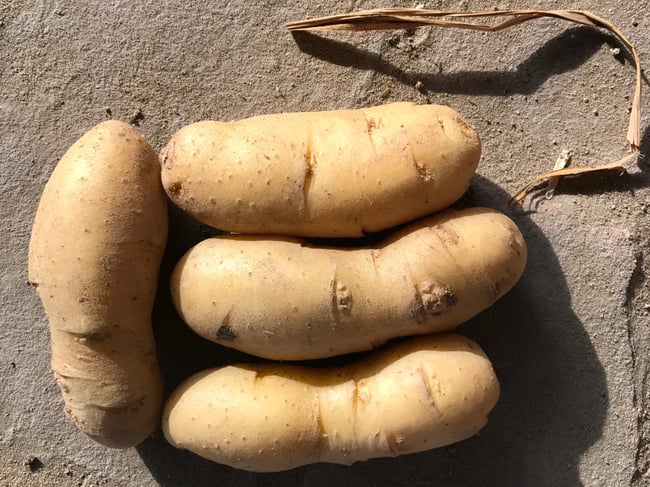 Potato Spindle Tuber Viroid (PSTVd) is transmitted through true seed and easily transmitted from plant to plant by contact and cutting stems in vivo and in vitro.