What are the effects and symptoms of potassium deficiency in potatoes?

Second to nitrogen, potassium (K) is adsorbed most by the plant and is essential for its normal growth and development.

Effects in relation to diseases
At the outer side of epidermis cells, K favours the formation of thicker cell walls. Consequently the plant’s resistance to penetration of pathogens such as Alternaria solani and Botrytis cinerea is most likely increased. K-deficiency makes tubers more sensitive to attack (infection) by the various species of the fungus genus Pythium, the causal agents of leak.

Effects in relation to quality, yield and storage life
K-deficiency causes the crop to die early and has therefore a strong negative effect on tuber size and yield. However, also tuber quality and storability are negatively influenced. K-deficient tubers quality are particularly sensitive to mechanical bruising during harvesting and handling and to pressure bruising during storage. When growing starch potatoes, it should be noted that low K-application will lead to a higher underwater weight (indication for starch content), but that at the same time tuber yield is negatively affected. The ambition to achieve the highest possible underwater weight may have such a negative effect on the tuber yield that the total result (weight for payment) falls short to what is achievable.

Symptoms
The first sign of K-deficiency is the change of colour of older leaves, which turn dark green and become deep-veined and shiny (Photo 1). The surface between the veins becomes lumpy. With a more severe deficiency, the leaves turn bronze, while the veins remain dark green (Photo 2). Leaf margins curl downward, while the tissues along the margins and sometimes in the middle of the leaflet start to die (Photos 3 and 4). If K-deficiency presents itself early, plants become stunted with closely-set, slightly cup shaped leaves. The crop dies prematurely (Photo 3). Due to K-deficiency, after harvesting and handling the tubers, blue-grey to brown-grey spots may develop in the flesh during storage. These spots mostly occur near the vascular ring at the stolon end of the tuber. 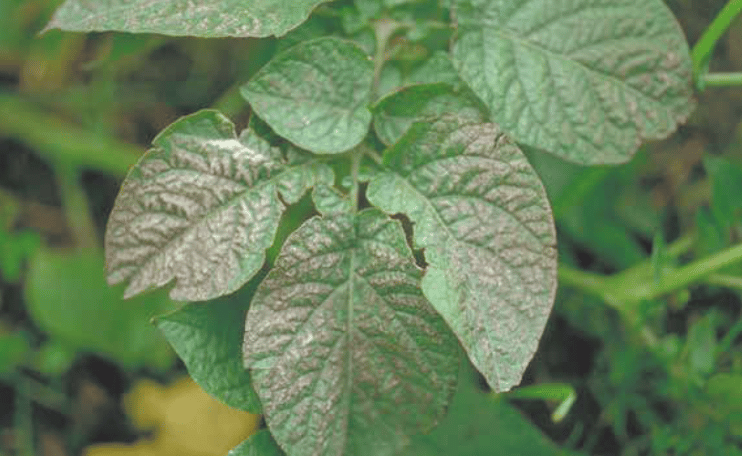 Bronzing, deep-veined leaves with a distinct shine, due to advancing K-deficiency.
(Photo: Soil and Crop Improvement Assen, the Netherlands)

Want to read more about Potassium deficiency and potato diseases in general?
Then our Potato diseases book is what you are looking for!
Buy your copy today in our webshop: