Water limitation of potato crop yields at the regional level

Potential yield is the theoretical yield that can be calculated when all the rates such as the photosynthetic rate, respiration rate and distribution rate of dry matter to the tuber are optimal.

As soon as there is the slightest disturbance, such as temporary lack of water or nitrogen in the leaves, which is bound to occur under natural field conditions, those rates change and slow down crop growth and reduce yield. In an ordinary crop, there are always disturbances—even if all inputs are applied optimally.

Also in a field, there is always some deleterious biotic soil activity (soil life) such as free-living nematodes that negatively influence root functioning. Thus, the potential yield can never be achieved in real life. In yield gap analysis, however, it is essential to know its level, for the purposes of distinguishing different agroecological zones. It is the basis for the calculation of water limited yields in rain-fed production areas. These are regions with supplemental irrigation such as in North-West Europe or in areas where the crop almost solely depends on irrigation such as in Tunisia and Algeria in North Africa and in the Washington Basin in Idaho in the USA.

Water limited yields are yields that take into account that during certain periods of the growing season the crop suffers from drought. This happens especially in rain-fed production systems or where use of water is restricted for economic or policy reasons. There are also many sites in the world where there hardly is lack of rainfall during the growing season. North East China (Heilongjiang), Korea and the North of Japan have summer crops with ample rain. Theoretically, there is also enough rain to grow a potato crop in the subtropical and tropical highlands during the rainy seasons. Due to risks of late blight when rains are too intensive and too frequent during the peaks of the season, growers tend to avoid this peak. They trade the risk of blight against that of drought. Not often are they able to supply irrigation when needed due to lack of equipment or of a source of irrigation water. 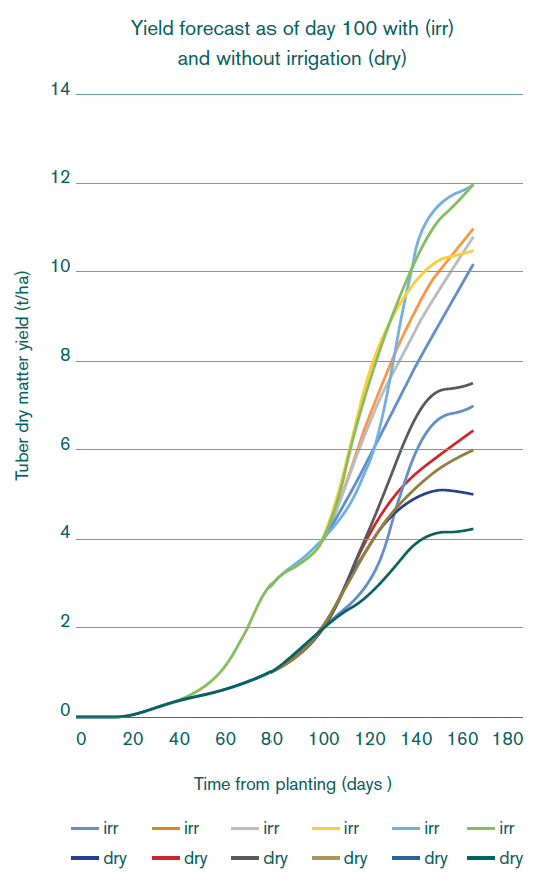 Model calculations with real-time weather data of the ongoing season until mid-season and henceforward use of long-term past weather data enable the exploration of the range of yields to be expected. The closer to the final harvest date, the narrower the plume and the smaller the difference between predicted and actual values.

Want to keep reading about the potato crop and its potential yield?
Our Potato handbook is a global potato university in 1 book!
Buy your copy today and get a one-year free subscription to PotatoWorld magazine.